www.youtube.com/motorsportskoda
Ponta Delgada, 25 February, 2012 – Reigning IRC champion Andreas Mikkelsen of ŠKODA UK Motorsport made the best possible step in his effort to repeat his last year's victory in the IRC championship. In the opening event of the 2012 IRC, the Sata Rally Acores, Mikkelsen put in a brilliant performance to mark his first win in the new season and extend the streak of top-class performances he started by dominating the last two events of 2011 (Scotland and Cyprus). Juho Hänninen of ŠKODA Motorsport (factory team), last year's winner of the Sata Rally Acores, came second. Fourth place is a reason to celebrate for Sepp Wiegand of ŠKODA AUTO Deutschland who made his IRC debut in the Azores. The dominance of ŠKODA Fabia Super 2000s was sealed by Hermann Gassner jr. of Red Bull who finished fifth.

Taking place on Sao Miguel, the biggest of the Azores Islands, the rally was spread over three days each of which offered different conditions. Rainy weather, so typical of this island, took turns with beautiful sunny spells, and it was as early as the first stage when it became apparent that there were just two drivers in the filed to fight for the overall victory - Andreas Mikkelsen and Juho Hänninen, both in Fabia Super 2000s. One of the decisive moments of their fierce battle for every second came in Stage 4 when Hänninen did a 360 at high speed. Andreas Mikkelsen won the opening rally of the 2012 IRC and ŠKODA scooped four of the first five places.

Michal Hrabánek, Head of ŠKODA Motorsport: “ŠKODA grabbed the first two places in the opening event of the IRC to win the maximum possible number of points in the Manufacturers category – we have indeed made a good start to the new season. Much credit goes to the first two crews, but also to Sepp Wiegand & Timo Gottschalk who made a successful IRC debut.”

Andreas Mikkelsen: “I made a great start to the new season by winning in the Azores, and I am happy for the whole team. It couldn't have been better.”

Juho Hänninen: “We certainly wanted to repeat our last year's victory, but Andreas was simply better. We made a small mistake on Day 2 which cost us quite a few seconds that made a difference in the end. However, we have achieved the best possible result as a team and that is great”.

The IRC series continues over March 15-17 in the Canary Islands. The championship consists of 13 events this year. 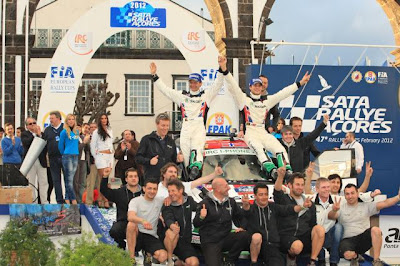